ABCSG President Prof. Michael Gnant in 2022 once again among the who’s who of the global academic research elite 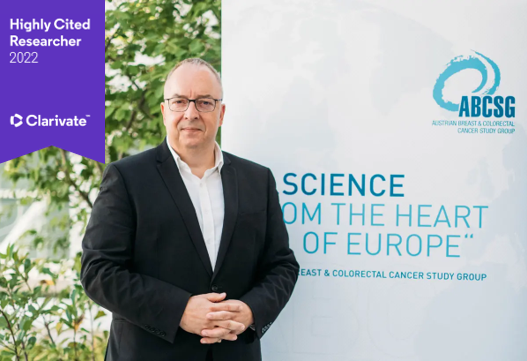 For the third time already, Austria’s internationally renowned cancer researcher Professor Michael Gnant, MD, FACS, FEBS has been named as one of the worldwide “Highly Cited Researchers 2022”. Frequently cited researchers have a great influence on the scientific community and study achievements. Thus, they make a significant contribution to new, far-reaching developments to improve therapeutic options.

As a Highly Cited Researcher one ranks among the top one percent of all scientific researchers whose work can be found on the Web of Science™ (https://clarivate.com). In 2022, 6,938 scientists are listed. The publications in the Cross Field category, for which Dr. Gnant received his award, are characterized by their strong influence on several scientific disciplines. This year in Austria there are 25 Cross Field honorees, including only three within the field of clinical medicine.