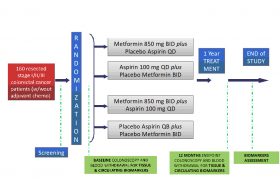 To test the synergistic effect of the combined treatment with low dose ASA plus MET given for 1 year to reduce the expression of NFκB (primary endpoint) in unaffected colonic tissue in patients with removed CRC.

Top
We use cookies to ensure that we give you the best experience on our website. If you continue to use this site we will assume that you are happy with it.Got it!NoPrivacy Policy
Change cookie settings